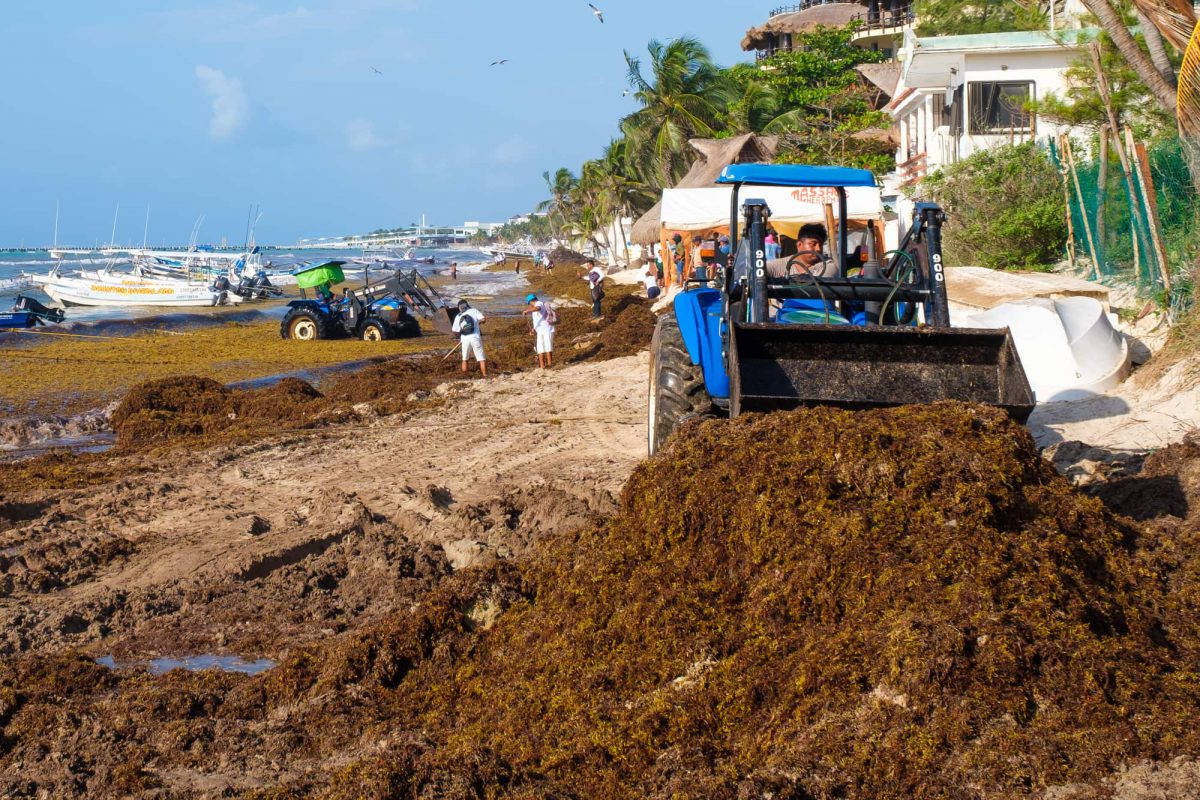 Thinking of booking your vacation in the Riviera Maya? There is likely to be one thing on your mind… How is the seaweed in Riviera Maya right now? Well, I am happy to let you know that thanks to Cozumel being an Island there is not currently any seaweed in Cozumel, and we are confident it will stay that way.

In this post, we are going to address the sargassum issue that Mexico has been having over the past few years and why Cozumel is not affected by it even though the rest of the Riviera Maya is struggling.

Why is the Sargassum such an issue for Mexico

One of the main draws for vacationers each year is the pristine beaches of the Riviera Maya. The white-sand beaches and turquoise waters have been a top attraction for international guests for decades.

However, over the past few years, the once beautiful beaches of Cancun, Playa del Carmen, and Tulum have been transformed into something less than desirable, thanks to the influx of sargassum that has been plaguing the Carribean for some time now.

Over the past few years during the summer months, the east-facing coasts of the Carribean have been overwhelmed by sargassum.

But what is sargassum?

And will it ever go away?

What is Sargassum anyway?

Sargassum is a particular type of brown seaweed possibly originating from the coasts of Africa. Despite its origin, large groups of it can easily be found in the Atlantic Ocean. There is a whole area referred to as “the sea of sargassum”. The sea of the sargassum covers an area of approximately 1,100 km wide by 3,200 km in length. It’s a pretty incredible mass located between 4 cardinal points the gulf stream, north Atlantic, canary, and the North Atlantic equatorial.

Because the sargassum is not tied to the seafloor it just floats around. It’s composed of different leafy structures, with a significant quantity of elements similar to berries called pneumatocysts. These pneumatocysts are full of oxygen and in charge of providing to the seaweed a high level of buoyancy which helps it keep afloat.

Over the years this seaweed occasionally turned up along the beaches of the Riviera Maya. Mostly in Playa del Carmen, Tulum, and Cancun. However, it would be around for a short time and then leave again. But in early 2018 it returned and since then the sargassum days have since outnumbered the non-sargassum days sadly. 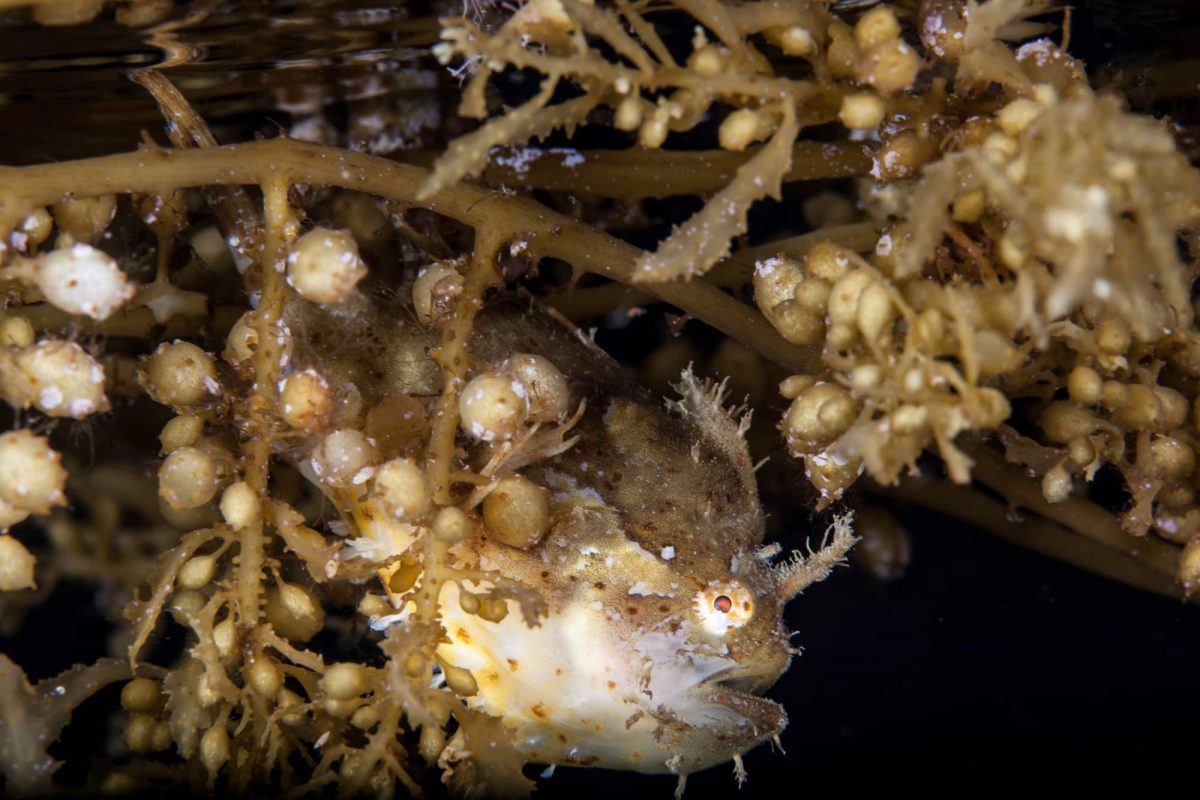 Why are Mexico’s beaches affected by the Sargassum

Sargassum tends to frequent beaches that provide certain favorable chemical conditions. When the conditions are met, it can settle on them to feed and grow relatively calmly. Then it is dragged to the shore by the rising tides, once onshore it begins to decompose and quite frankly, it stinks!

The frequent appearance of sargassum in the Caribbean and in the Gulf of Mexico is due to the fact that most of the beaches here have excellent conditions. Thanks to our year-long warm temperatures the sargassum is able to feed and reproduce quickly. The reason there is so much is that the sargassum has an unusual method of reproduction which allows it to expand on its own. This just adds to the difficulty in eliminating it, as it just keeps on reproducing!

How does the Sargassum get to Mexico?

In reality, no one really knows for sure how it gets here, it’s a bit of a mystery.
We believe that it is transported from one place to another by sea currents, or by the strong winds of storms. However, the large amount of seaweed that appears on the coasts, and the frequency with which it does so (which can easily scratch the absurd) leaves a lot of questions about the speed in which it is traveling.

Although sea currents may take it to different destinations it often settles very punctually to the north of the Pacific Ocean in the “Sea of Sargassum”, and then it gets dragged in small quantities to different points of The Caribbean Sea and the Gulf of Mexico. 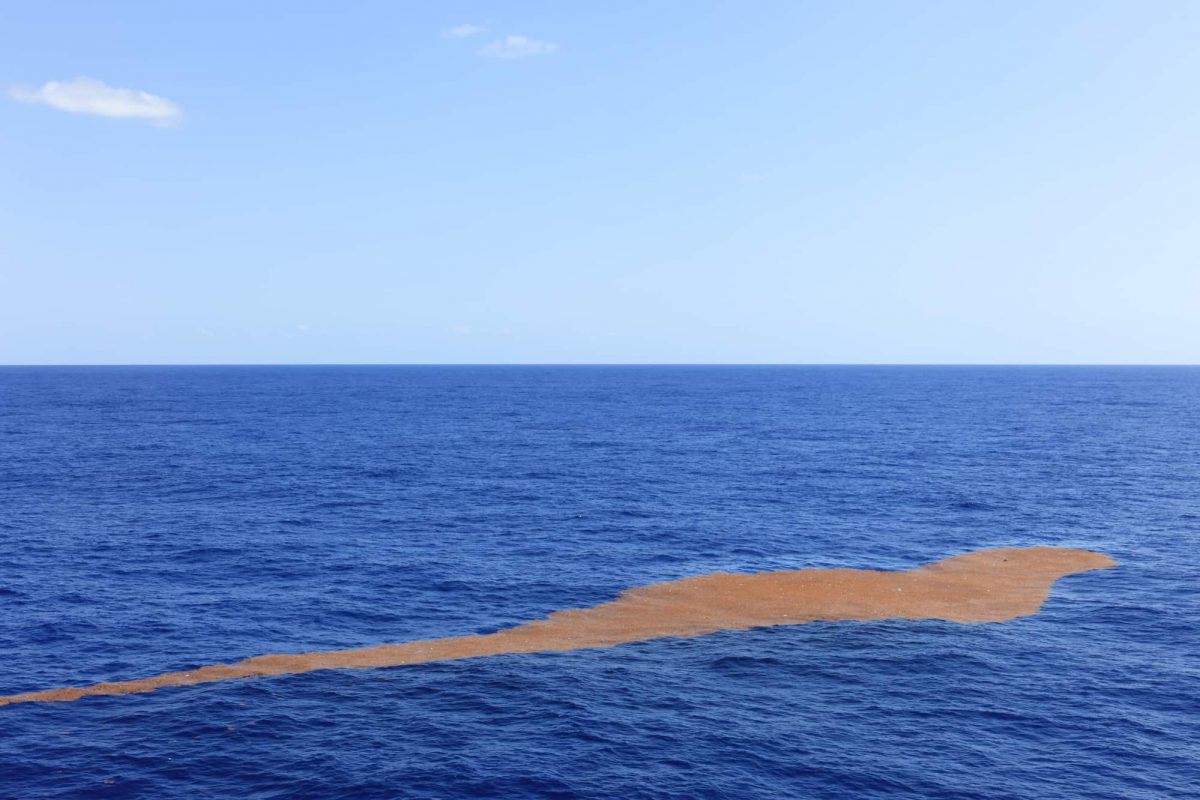 Here it is able to reproduce and create problems for fish, shellfish, and turtles living in here. Although it is food for some, it is also an invasive species, capable of significantly deteriorating some of the natural processes in the different ecosystems to which it is integrating.

Which places in Mexico are being affected by sargassum the most?

Since the sporadic and massive (literally massive) appearance of sargassum in different locations from late 2011, many of the beaches belonging to islands and coasts bordering the Caribbean are saturated with it.

Large quantities of sargassum have appeared in Playa del Carmen, Cancun, Tulum, and so many other tourist sites. There have been times when there has been so much that it has accumulated on the beaches preventing beachgoers from entering, and considerably damaging the landscape.

Do you need to worry about visiting the Riviera Maya?

In spite of the above, you should not worry. Not all beaches in the Caribbean or the Gulf are affected. Only beaches that have certain chemical or climatic conditions make a good home for the sargassum.
There are locations in the Carribean that are entirely free of sargassum. The trick is to look for the west-facing beaches. As the sargassum is coming from the open ocean traveling west, it is the east-facing coasts that are receiving all the sargassum.

So if you want a sargassum free beach in the Riviera Maya, then you need to consider visiting Cozumel or Isla Mujeres when you’re planning your next vacation. Both of these islands have west coast beaches and have really dodged a bullet. While the rest of the area is suffering they have maintained their characteristics and beautiful blue water beaches, which have been a major tourist focus for many years. 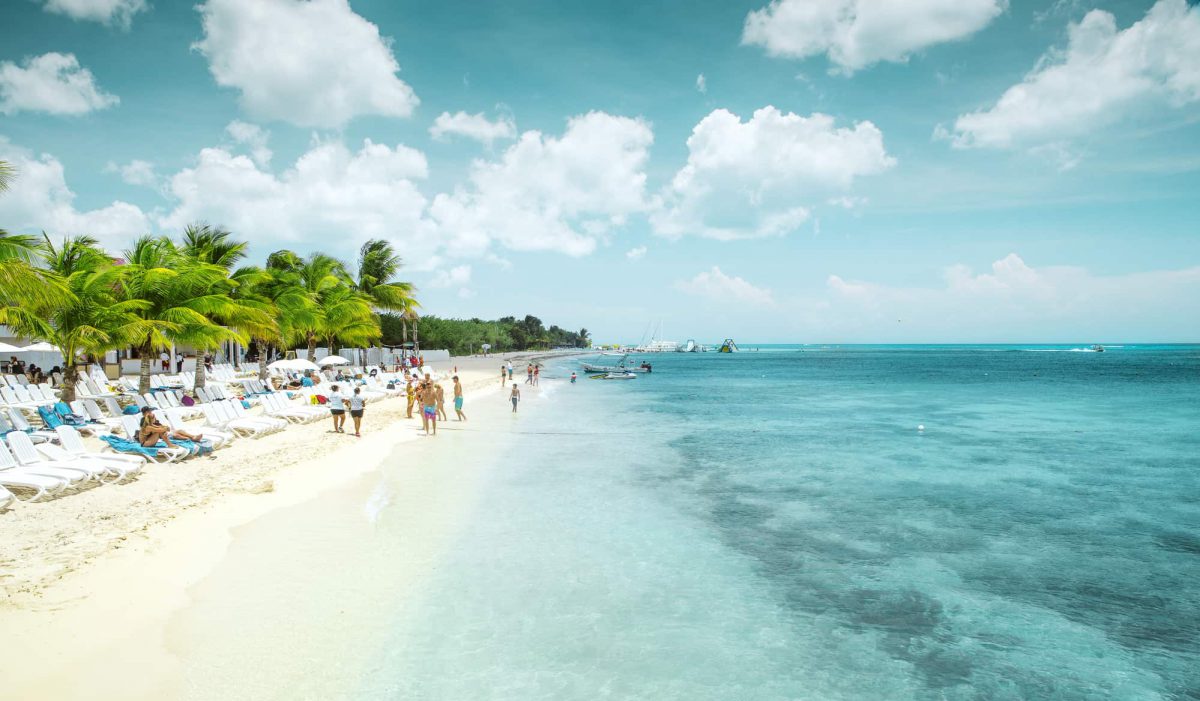 The good, the bad, and the ugly

Before you despair, not everything related to sargassum is negative. In fact, it does have a lot of benefits for some environments. Sargassum acts as a refuge for many different species who have in fact converted large areas of it into their natural habitat. The seaweed provides an essential source of nutrients for those species and has become their primary source of food.

Sargassum in the right measure is also able to help some beaches to anchor the sand and help in the creation of sand dunes. It is also an excellent fertilizer for a large number of plants. Plus some studies have shown that there are some possible medicinal uses for it, as well as it being used as a biofuel.

So there were the good points, now for the bad…

The appearance of sargassum in Cancun, and many other areas where coral reefs are located can be genuinely detrimental to both fully submarine algae species, and to the fish and animals that inhabit the area.

Large tracts of algae often hinder the sun rays that are necessary for many specimens to carry out the photosynthesis process and obtain important basic nutrients that only these provide. In addition, when seaweed is present in such large quantities it tends to absorb most of the oxygen present in the water, thus creating an overload of carbon dioxide that settles in the ocean. The result is that different species of marine life will die of suffocation.

But this doesn’t end there… this lack of oxygen also produces a substantial increase in the acid levels of the pH of the sea. Now, this doesn’t affect us humans, but it does affect the life of different shellfish endemic to a given area because its exterior shell is composed mainly of calcium, which can be dissolved easily due to high levels of acidity.

When the seaweed is washed up and eventually decomposes, it emits a strong nausea-inducing odor which puts people off visiting the beach. It can also have an effect on local fishing as it can be difficult to get smaller boats out past the sargassum invaded shore. It is, therefore, vital for the local authorities to design efficient measures that allow them to deal with seaweed, without significantly harming the environment.

When is the seaweed in Riviera Maya at its worst?

As already mentioned, the sargassum usually settles often along the Gulf of Mexico and the Caribbean. Research is still being conducted, however, it seems that the seaweed appears more frequently during the summer months, because of increased air currents, which together with sea currents, transport the sargassum to most of the east coast of the continent of American. 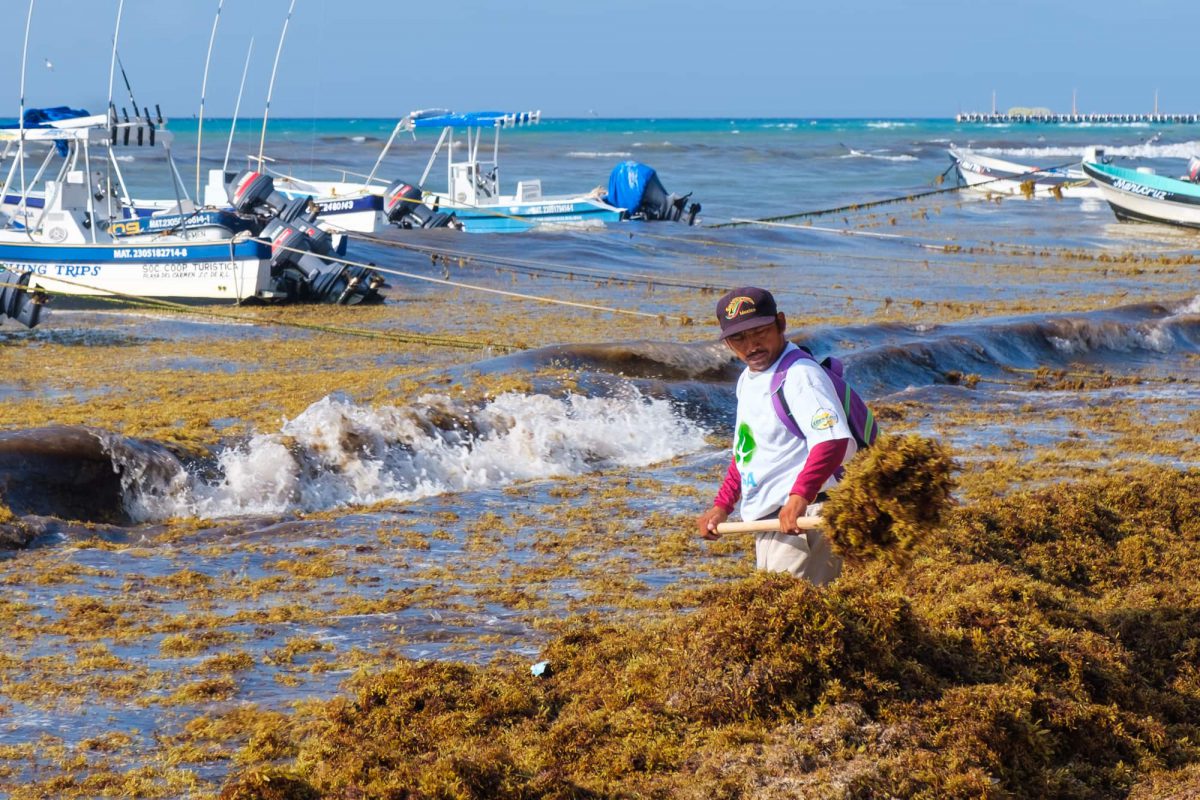 What is being done about the Sargassum in The Riviera Maya?

The University of Florida, in conjunction with the UNAM, and several other organizations have published various papers aimed at clarifying the current sargassum situation. Much of this research is directed towards encouraging the development of manual harvesting processes to control and reduce the seaweed without having a negative effect on the delicate ecosystems.

These documents also propose several different ways of addressing the crisis of sargassum in an “advantageous” manner. They propose the way forward is through the efficient integration of both governmental and non-governmental entities (private companies) in order to make use of sargassum in alternative ways. Proposing that we begin to take advantage of the large number of nutrients in the seaweed.

There are organizations that are continually monitoring the seaweed and sharing those findings through reports and published photos. Their aim is to keep an up to date detailed record of the number and location of beaches that are affected by this phenomenon.

Where can I vacation in the Riviera Maya without Sargassum?

Well, that’s easy! Come to Cozumel, thanks to our East facing beaches we are largely unaffected by the sargassum and would happily welcome you here any time of the year. 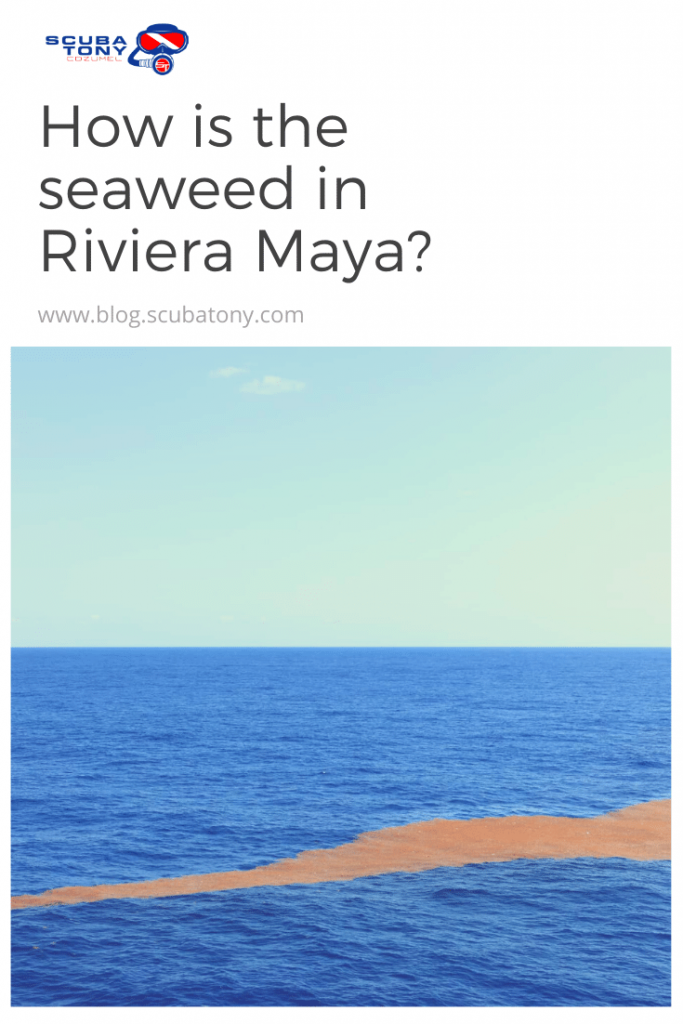 The Best Places to Stay in Cozumel for Scuba Divers