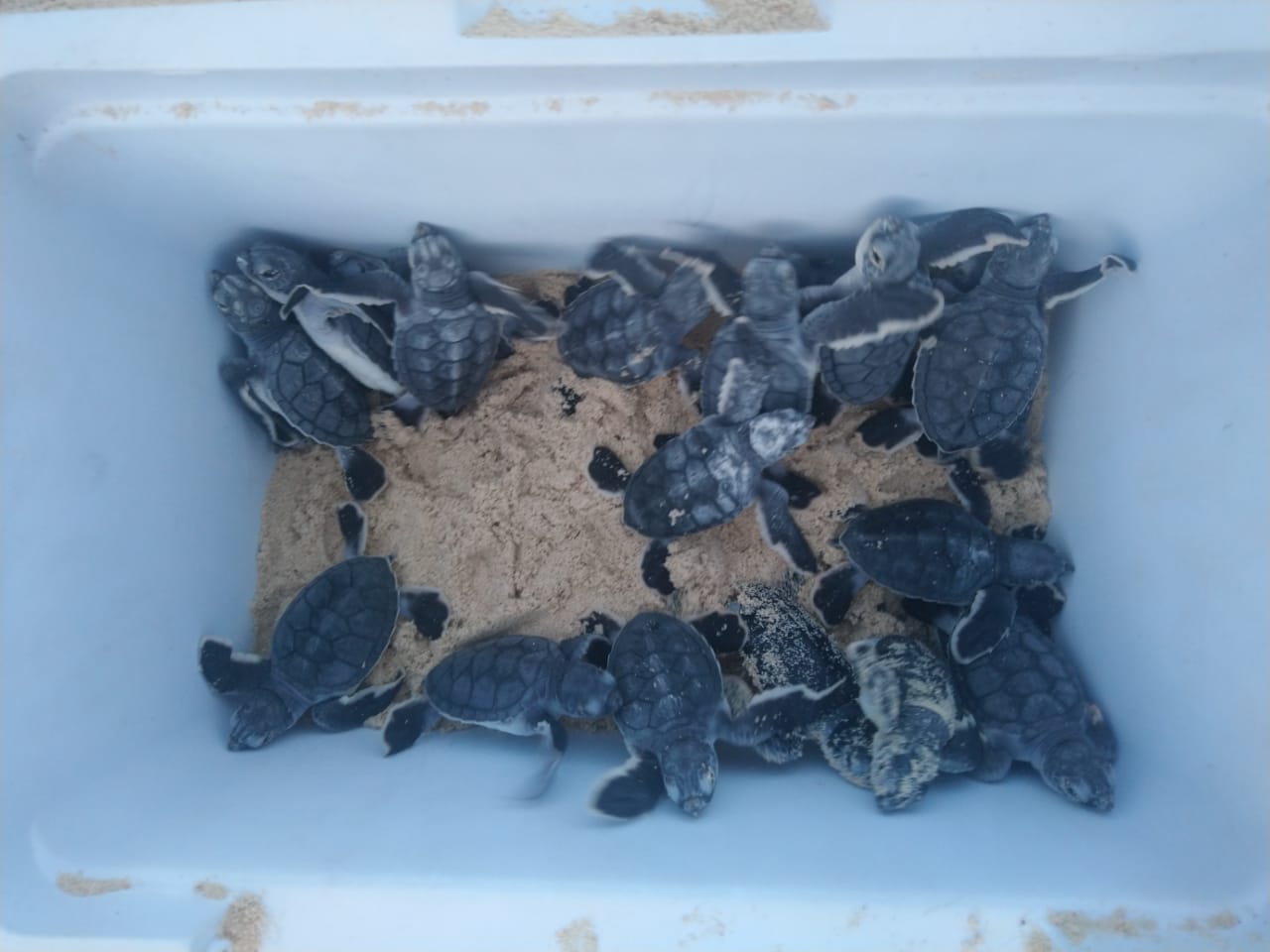 Green Sea Turtles that had a hard time escaping their nest and were rescued waiting in a bucket of sand to be released along with an actively hatching nest.

The two species most commonly seen when diving in Cozumel are the Loggerhead and the Green Sea Turtle. They both use the Earth’s magnetic field to guide them back to the same beaches in Cozumel where many years ago they hatched. They come to continue the circle of life by digging holes in the sand to lay their own clutches of eggs.

Of all the hard-shelled turtles, Loggerheads are the largest! They generally weigh 180 to 440 pounds but the biggest Loggerhead on record weighed 1,202 pounds. Their shells on average measure 35 inches in length.

Loggerhead turtles eat both animals and plants, making them omnivores. Their diet consists of a wide range of undersea creatures, but their diet consists mostly of invertebrates found at the bottom of the ocean. Loggerheads eat many other things, in fact, they have the most varied diet of all sea turtles. They feed on corals, sponges, jellyfish, starfish, fish (adults, juveniles and eggs of different species), algae, squid, and sea urchins just to name a few. Their big strong jaws are used to crush their prey, and they also have been seen using special scales on their front limbs to tear off large chunks of food.

Between the ages of 17 and 33 years old is when female loggerheads first start to reproduce, after which they have a cycle of 2 to 4 years before they will breed again. However, during the breeding season, they will have 3 to 4 egg clutches. Each clutch usually has over 100 eggs. These clutches have been shown to have been inseminated by multiple males, with as many as seven separate males contributing sperm to different sections of the clutch. Females will climb a beach to dig a hole in the sand and lay their eggs. The whole process from exiting the water to again swimming out to sea takes a few hours.

The Green Sea turtle’s name comes from the color of his skin, not its shell! The shell of the Green Sea Turtle is normally a dark brown to olive color. The Green Sea turtle generally weighs 150 to 400 pounds, although the largest ever recorded weighed 871 pounds! Their shells on average measure 31 inches in length.

As juveniles, they are carnivores, with a diet consisting of jellyfish, fish eggs, mollusks, worms, and other creatures. As they grow, their diet starts to change and they become omnivores, adding in algae and sponges to their diet. By the time they reach adulthood they are almost strictly herbivores, grazing on seagrass and algae.

Green Sea turtles generally start reproducing between the ages of 26-31 years old. They also have 2-5 year cycles before they will breed again. A female Green Sea turtle will lay up to 9 clutches in a single breeding season. 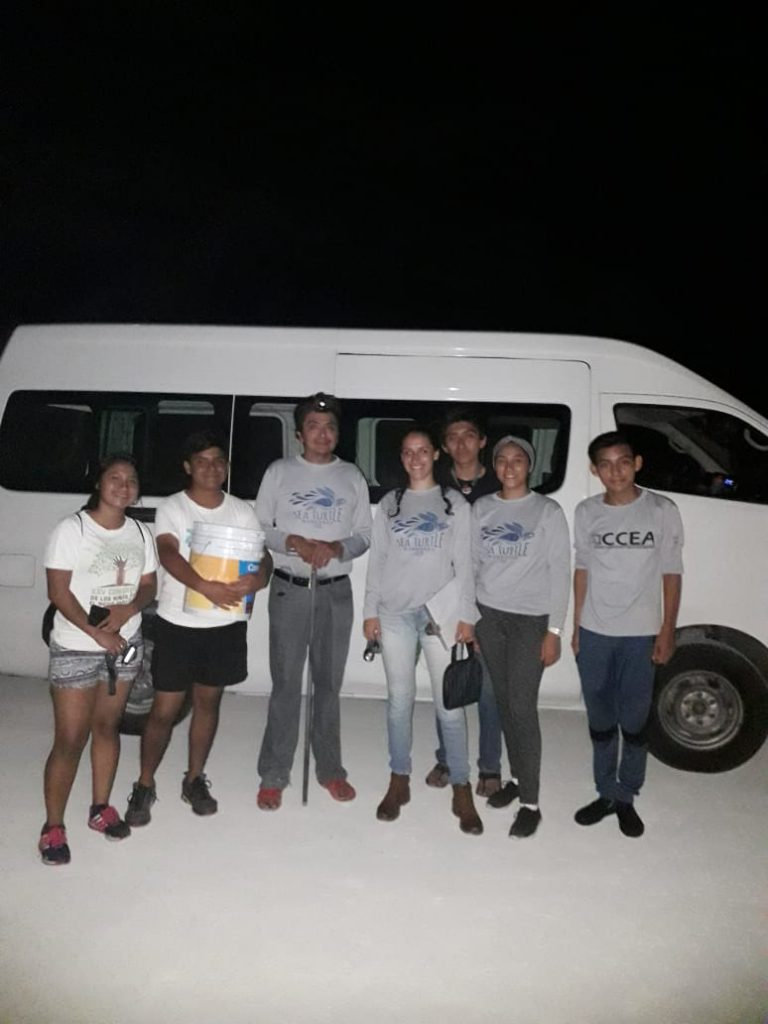 I spoke with Carlos Ricardo Peralta Muñoz, who is a Project Coordinator for the Center of Conservation and Environmental Education, a department of the Cozumel Parks and Museums Foundation (FPMC). Carlos Ricardo is the Technical Manager of the Sea Turtle Conservation Program that FPMC runs inside of Punta Sur Ecological Park. In 1996 the Punta Sur Ecological Park was given to FPMC when it became an official ecological conservation zone and state refuge.

Carlos Ricardo told us that in 2019 they broke a new record of 1,621 nests in Punta Sur alone! 93 of those nests were Loggerhead, the remaining 1,528 nests were Green Sea turtles in Cozumel. He explained that the yearly nest counts fluctuate because the female turtles do not return every year to lay eggs. The previous record in Punta Sur was a total of 1,519 in 2017. In 2018 only 683 nests were recorded, showing the fluctuations that happen each season.

Every year the number of turtle nests in Cozumel is increasing, which is amazing news! Each nest holds between 80-120 eggs, once hatched they have to work for three days to break out of their deep nests in the sand. Each nest is around 2.5 feet deep, so it’s a lot of digging for such small babies. Carlos Ricardo explained that they make an artificial wall of sand around the side of the nest so that the first turtles to break loose take a little extra time moving around, this ensures that the eggs of their siblings are disturbed, encouraging them to hatch and start their journey to the surface.

They also build a “runway” of sand so that the turtles head directly towards the ocean, instead of down the beach. The crews check the nests that hatched the previous day, in order to rescue any turtles that are struggling to surface. They also count the eggshells, as well as unfertilized or spoiled eggs and any deceased turtles. They collect the surviving turtles and allow them to make their journey to the ocean from one of the nests that are actively hatching.

FPMC runs the Sea Turtle Conservation Program that takes place inside of Punta Sur Ecological Park to help the nesting turtles in Cozumel. You can contact them via email at conservacion@cozumelparks.org to learn more about how you can enroll as a volunteer. As of right now, they are not sure how they will navigate the upcoming season of volunteering due to COVID-19, but they are optimistic that they will be able to continue with their volunteer program in June.

The Committee for the Protection of Sea Turtles is sub directed by the Ecology Department, and also includes the Cozumel Parks and Museums Foundation (FPMC), the National Commission for Protected Natural Areas (Conanp), the Environmental Promoter of La Laguna (Pasa), Conservation, Research and Environmental Management of Cozumel (Cimac) and the Áak Brigade. These organizations work together with volunteers to monitor and care for the turtle nests that are laid each season on the Eastern shores of Cozumel Island.

Edgar Gamaliel Sosa Coral is the Camp Technician and is responsible for the San Martin Turtle Camp on the East side of Cozumel Island. The Turtle Camp at San Martin has been in operation since 2013. In the 2019 season, there were 5,423 nests marked, with 337,497 turtles released! The first nest of the 2020 season was marked on April 27th, and as of May 12th, there were 20 nests marked in total.

How you can help with the nesting turtles in Cozumel

He gave us the following information concerning the volunteer programs that they offer:

The first program is nest marking. This consists of making patrols during the night from 10:00 pm to 5:30 am the next day; to search for turtles on the beaches of Cozumel digging new nests. They use wooden stakes to mark the nests, which include information such as the nest number and date it was marked.

The second activity that they have is watching the nests hatch. This activity is for observation only, there is no direct contact with the newly hatched turtles. This activity takes place from August 15th through October 30th.

The third activity is the cleaning of the already hatched nests. They carefully dig out the surviving turtles, as well as count the deceased turtles, eggshells, and any rotten or unfertilized eggs.

If you are interested in volunteering to help the nesting turtles in Cozumel you can contact them at this email addresses edgarsoacoral2@gmail.com to schedule volunteering in any of the previously listed activities.

They also hold turtle rescue workshops in Cozumel specifically designed for tourists, those dates and availability depend on interest. All of the programs are run as a way to raise funds for them to continue the work they do, so there is a “fee” to participate. Participation in the workshops can be scheduled at leve@aol.com.mx or on this Facebook page.